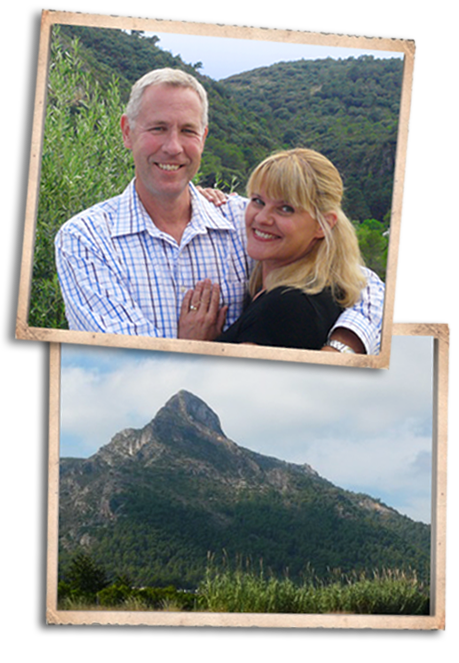 Cass and Jonathan Hall are the founders of LA MONTAÑA.  Cassandra is a veteran of the UK cosmetics industry, and was Communications Director of Lancôme.  Since leaving corporate life she has branched into consultancy, specialising in brand and product design.  She designed her own skincare range, called Gorgeous, which sold on QVC (with Cass presenting it), and in Victoria’s Secret in the U.S.

Jonathan is an award-winning screenwriter for both TV and films, and fluent Spanish-speaker, with a lifelong passion for Spain.  He was also co-founder, in 1987, of cricket bat manufacturers Millichamp & Hall – something of a cult brand (if you’re into cricket), and still going strong twenty-five years later.

Born and bred Londoners, Cass and Jonathan actually met in Spain in 1980, and moved in 2011 to a remote Valencian village, where they live with their two dogs Dudley and Dixie, surrounded by mountains, breathing clear, inspiring air…

Cass by Jonathan
“Cass has an extraordinary sense of smell.  I don’t just mean a keen sense of smell, I mean she has a clear idea of what she likes, and what she doesn’t, and even WHY she does and doesn’t.  She sniffs, she judges.  I’m very grateful that I passed muster!”

Jonathan by Cass
“Jonathan is an amazing blend of creativity and practicality.  I don’t know how he writes original and funny (very) scripts AND puts Ikea furniture together, but I’m super glad he does.  Without him, I would be, well, incomplete, obviously, but also prone and sobbing with frustration on top of a pile of flat-pack boxes.”

Marianne Martin is our practically telepathic ‘Nose’, who seems to know what we want before we know we want it.  Or, indeed, precisely what it was we wanted in the first place.  She doesn’t just understand the La Montaña brand – she pre-understands it (probably not an actual thing).

Louise Dooley our candlemaker is just about our favourite person.  She loves her job – we mean LOVES her job – and takes great pride in doing it well.  And she’s the best.  And her studio feels that same sense of pride and tradition; blending the scents and the wax by hand, pouring the candles by hand, even trimming the wick by hand.

Zed Gregory is our genius designer, visionary, and wall photographer.  And Isabelle Eeles is their favourite illustrator.  We like to think that they are two sides of the same glittering coin – though this has not yet been scientifically verified.  They Them Studio

Office Innovations – our web gurus are, in fact, wizards.  Chief wizard is Steve Gayler – who has infinite knowledge, and infinite patience with us.

Before his death in 2020, Jurgen Schadeberg generously allowed his glorious photos of Spain grace our website.  A world famous photographer who fled Nazi Germany as a teenager, Jurgen became the chronicler of the South African townships from the fifties onwards.  His work covered Sharpeville, Sophiatown, and Robben Island.  He knew Mandela, and took an iconic photo of him in 1994 when he returned to his cell of 27 years.  All in all, a much-missed legend of a man – and you can buy all of his prints and his book “Spain then and now” from www.jurgenschadeberg.com